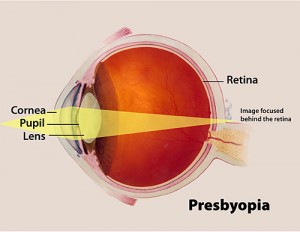 Presbyopia is a condition where the eye exhibits a progressively diminished ability to focus on near objects with age. Presbyopia’s exact mechanisms are not known with certainty; the research evidence most strongly supports a loss of elasticity of the crystalline lens, although changes in the lens’s curvature from continual growth and loss of power of the ciliary muscles (the muscles that bend and straighten the lens) have also been postulated as its cause. Like gray hair and wrinkles, presbyopia is a symptom caused by the natural course of aging. The first signs of presbyopia–eyestrain, difficulty seeing in dim light, problems focusing on small objects and/or fine print–are usually first noticed between the ages of 40-50.

The ability to focus on near objects declines throughout life. In optics, the closest point at which an object can be brought into focus by the eye is called the eye’s near point. A standard near point distance of 25 cm is typically assumed in the design of optical instruments, and in characterizing optical devices such as magnifying glasses. Without correction, the near point is at 3 inches (7 cm) at age 10, to 6 inches (16 mm) at age 40, to 39 inches (1 meter) at age 60. As a result, a 60-year-old must use corrective lenses to read at a comfortable distance of 60 inches.

Want to join the discussion?
Feel free to contribute!

Get all latest content and promotions delivered to your email!

What is Hyperopia and what causes it?
Scroll to top